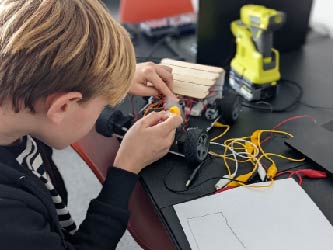 What's better than building a robot?  Building a robot that you can put up against your friends robot in armored combat!  In this camp students will have the opportunity to create a fully controllable robot that is designed and build for combat.  at the end of the week, students will put their creations to the test against other student robots!  What will you create?

Are these camps appropriate for someone with no experience/tons of experience?

Yes! Our camps are structured to be complete beginner friendly while having several ways of leveling up the tasks to challenge even the most seasoned teen!

Are the robots safe for my child to use?

Yes! the robots are made with equipment and parts that are designed for teenage users.  While the materials are specifically chosen for teens, the concepts and techniques they learn will stay with them through much more complex builds in the future, maybe even a future career in robotics!

Does my child need to bring their own laptop or other equipment?

Nope! We have all the equipment needed, including high end gaming laptops.  If your child wishes to bring their own computer please let us know so we can make sure that it is compatible with our software.